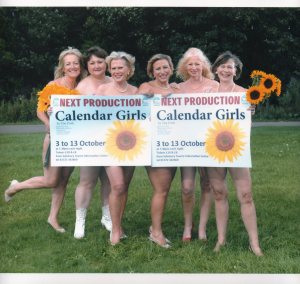 When Annie’s husband loses his battle with cancer, her best friend Chris comes up with the idea of an alternative calendar to raise funds for a suitable memorial.

As the calendar progresses, the bonds of friendship are put to the test.

In this strong ensemble production, well-paced with great visual comedy, each of the six WI ladies enjoyed their moment to shine in a blend of Northern humour and fighting spirit. The Yorkshire accents were very good when they were present – but there was a tendency for the accents to slip more often than not, although this was a minor problem when the depth of character acting is as strong as this.

CALENDAR Girls is a pretty well-known tale these days.

Even if you are too young to remember the sensation caused by the Rylstone and District WI when they stripped off for a charity calendar in 1999, and you haven’t seen the hit 2003 film starring Helen Mirren and Julie Walters, you could hardly fail to miss the plethora of unlikely groups that have jumped on the nude calendar bandwagon since then.

This year is the first time amateur dramatic groups have been licensed to perform the play on stage, and across the country they have jumped at the chance.

Salisbury’s Studio Theatre is never one to shy away from a challenge, and this is no exception.

The play centres on the women of Knapeley WI who decide to raise money to buy a new settee for the relatives’ room at their local hospital after the husband of one of their members, Annie, dies of cancer.

Val Greathead as Annie puts in a heartfelt performance, as does David Rhodes as her husband John, while Sarah Kirkpatrick is excellent as the natural leader of the group, and Annie’s best friend, Chris, who gets a little carried away with their new-found fame and temporarily forgets the real reason behind the calendar.

Simone Haseley, as Ruth, is superb, and had the audience in stitches with her spot-on comedy timing.

The scene changes were rather clunky, making the play seem more a series of set pieces than a seamless production, some of the Yorkshire accents were decidedly ropey, and there were moments in the second half where some over-long speeches slowed the momentum unnecessarily, but none of this took anything away from the audience’s appreciation.

This was a really enjoyable play, and you couldn’t help but applaud the bravery of those willing to strip off on stage in circumstances where one little slip could have led to rather more being revealed than was intended.

Well done ladies, you did it proud.

I have been a keen supporter of Studio Theatre for 20 years, since I moved here from France, and worked on the new building. I happily see all their performances and, yes, their Hamlet was superb.

But after seeing Calendar Girls, I wonder where they can go next. It was absolutely perfect.

Where does all this wonderful new young talent come from?

Humour, pathos, sympathy, understanding – it could not be faulted in the slightest way.

This entry was posted on March 7, 2013 by salisbury_matt in Reviews.